True Will the whole be greater than the sum of its parts? (Successful six-month photo comes from here.) Alex Farris
The sun also rises (on camera, in a six-month project) | Alex Farris Photo Blog
Home
Previous
Archive
TAGS
Science
Personal

The sun also rises (on camera, in a six-month project)

I don't often look forward or pay attention to the winter solstice. I recognize the tilt of the earth relative to the sun at this point in its orbit, as well as the repurposing of ancient solstice commemorations to what we now know as Christmas, but for me it's never a yearly milestone or an occasion to celebrate in itself.


Then, in about July, I came across this. A pinhole camera can track the sun's movement across the sky, and when I found out about this my science senses got to tingling. "What a perfect mix of two of my passions!" I told myself. I resolved to start my own pinhole camera at the next solstice, and I promptly forgot about it until Saturday, when I finally ordered some pages of film on eBay.

The film arrived in the mail Thursday, just in time for the night of the solstice. I drank a can of Miller Genuine Draft because it was a convenient can; the beer tasted like water sponged out of bread. I cut the top off, covered the outside with years-old black construction paper that had turned purple, pinned a hole through the paper and the can, went into the darkness of the garage to place the photo paper in the can, and taped everything together with black Gorilla Tape. I taped it to a stick taped to a piece of rebar, and I stuck it in the ground at a corner of the house.

There it will stay, hopefully, for six months. If everything works out, I'll have a present to open at the summer solstice, even though I've never celebrated it before. 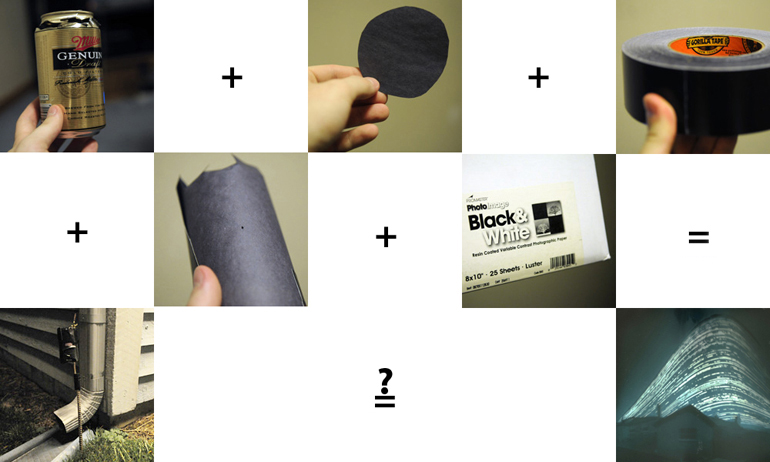 Will the whole be greater than the sum of its parts?
(Successful six-month photo comes from here.)