We aren't going to Hiroshima. Yet.

For the past semester I've been more than excited to go to Japan for my International Reporting class. My classmates and I were organizing interviews in Hiroshima, in the southwest region of the largest Japanese island, Honshu, to examine the issues surrounding the atomic bombs dropped in that city and in Nagasaki. We had appointments set up with bomb survivors, chemical scientists and the Hiroshima Peace Memorial Museum, and we were set to leave for the Asian country by planes to Chicago and to Narita airport in Tokyo on Friday.


Before we could leave Friday for our trip, however, another disaster, this time natural, hit the island. As I'm sure you know about already, hundreds of people have died in an earthquake and its effects off the coast of Sendai, in the norteast region of Honshu. Tsunamis, aftershocks (really earthquakes in themselves) and nuclear emergencies have plagued the nation, and the U.S. State Department put up a travel alert effective until April 1.

So, there won't be any spring break travel experience to Japan. Had we been there already, Tokyo and Hiroshima were far enough from the worst to be relatively safe; but I don't think our parents and close friends would think the same way. And in a good case of keeping things in perspective, the IU School of Journalism said, "Any change in our Japanese program going forward pales in comparison to this tragedy, which is the largest earthquake in Japan in a century." That said, the school is working on going to Japan after graduation to maintain the travel component of the course.

Given everything that happened, I don't have any photos from Japan. I do have this one from yesterday morning, when the bus trip back to Bloomington. Later that day, the class met to decide what to do to replace the trip.

Update
We will not be going to Japan at the end of the semester, as the State Department's travel advisory was upgraded to a warning. Instead, we will likely be traveling to Hawaii after graduation. While it is not out of the country, it is still a nice place to spend over a week. 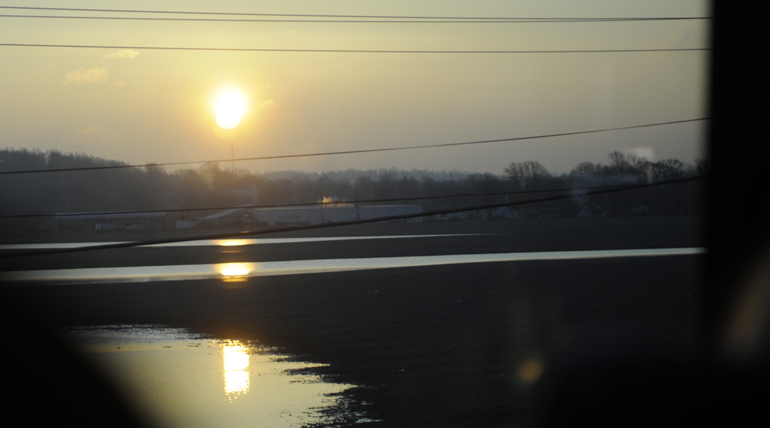