True I got these shoes during my sophomore year to replace my previous pair. They weren't special; they were comfortable, and I had good experiences with New Balance previously. I've never been attached to a pair of shoes, as most follow the normal cycle of 1) wear all the time, 2) wear sparingly when they start to fade, 3) use for outside chores. These shoes, however, were different. They're my traveling shoes, the only articles of clothing that made every trip during my 15-month Binge of Travel: St. Pete, Fla., North Carolina, London, Dublin, Paris, Madrid, Barcelona, Sevilla (twice), the Canary Islands, Girona, Athens, Santorini, Milan, Liverpool and Marrakech, Morocco. I traveled in them so much that the soles wore thin and rainwater could seep in. I wore grocery bags around them for a week until I got new shoes. When I see them now, I see how much I improved during my travel and how much I want to do it again. Alex Farris
These things are different now. | Alex Farris Photo Blog
Home
Previous
Archive
TAGS
Personal
Science

These things are different now.

I was cleaning my room last weekend, and I came across some things I hadn't touched in a long time. Such is the nature of college that you only take what you need and what is important to you at the moment. You may take the picture of all your friends dressed up real nice at senior prom and pin it up in your dorm room, but that ratty deck of cards you played euchre with your friends with at lunch can stay. Only when you've finished college and you've built some distance between you and your pre-college experiences do you see the value in a tennis ball or reassess the worth of your first pair of glasses. You even end up doing that to crap collected in college, such as a bunch of paper attached to strings.


Emerson said, "A man's growth is seen in the successive choirs of his friends," and I've been beyond lucky to have good choirs around me all my life. The quote, though, can also apply to the successive layers of things kept in one's room. Like sedimentary rock, they define what was important in each era of life; like eroding water, what remains after a clean-up is what is still important, even though that importance may have changed. I have no idea of the amount of crap I threw away and still have to throw away, but what remains will probably stick around for a long time and become part of the constantly evolving definition of my layered self.

... "This is a photo blog!" you say. Fair enough. Let's get to the pictures. These are some things I found whose importance has changed through the simple act of deciding to keep them. A memory changes each time it is recalled; in the same way, my reason for keeping each thing now is different than the reason I kept it in the first place. Take a look.

Also, hover over the photos. The title text has a quip and some production detail. 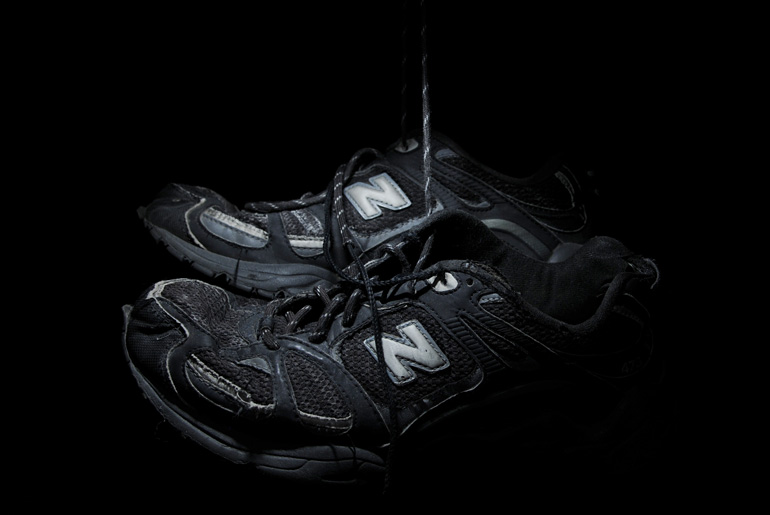 I got these shoes during my sophomore year of college to replace my previous pair. They weren't special; they were comfortable, and I had good experiences with New Balance previously. I've never been attached to a pair of shoes, as most follow the normal cycle of 1) wear all the time, 2) wear sparingly when they start to fade, 3) use for outside chores. These shoes, however, were different. They're my traveling shoes, the only articles of clothing that made every trip during my 15-month Binge of Travel: St. Pete, Fla., North Carolina, London, Dublin, Paris, Madrid, Barcelona, Sevilla (twice), the Canary Islands, Girona, Athens, Santorini, Milan, Liverpool and Marrakech, Morocco. I traveled in them so much that the soles wore thin and rainwater could seep in. I wore grocery bags around them for a week until I got new shoes. When I see them now, I see how much I improved during my travel and how much I want to do it again. Alex Farris 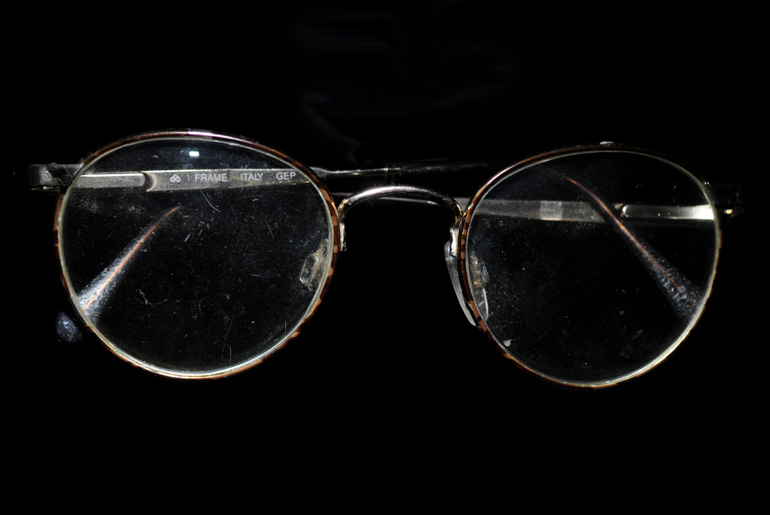 I ditched the other eight or nine pairs of glasses I've worn since these, but my first pair still holds some value. I got these in second grade, and I consider it the first external step on what was an inevitable march toward sociable geekdom. These, to me, are a reminder less of what I used to think looked cool (although I still go, "Holy cow, they're round!") as much as of how much a part of my life glasses have become. Now, it's an effective part of social situations. Whenever I talk about something difficult or confrontational, I instinctively pull off my glasses and wipe off the perpetual dust from my lenses; and of course there's the popular swipe-off a la CSI: Miami (though never as dramatic) when I want to make a point for hyperbolic effect. Alex Farris

My first public performance! The nerd mentality had well entrenched itself since second grade, and I was shy as hell. For some reason, though, I had the bright idea to audition for a play, Thorton Wilder's "Our Town," in eighth grade. Officer Warren had only four or five lines, but I gave them my all until the third act, when I sat in the graveyard with other deceased characters as a mute spirit. This was my tombstone, and ever since that time I've been at least a little more open to public speaking. Thanks to Mrs. Becher for making it and letting me keep it. Alex Farris 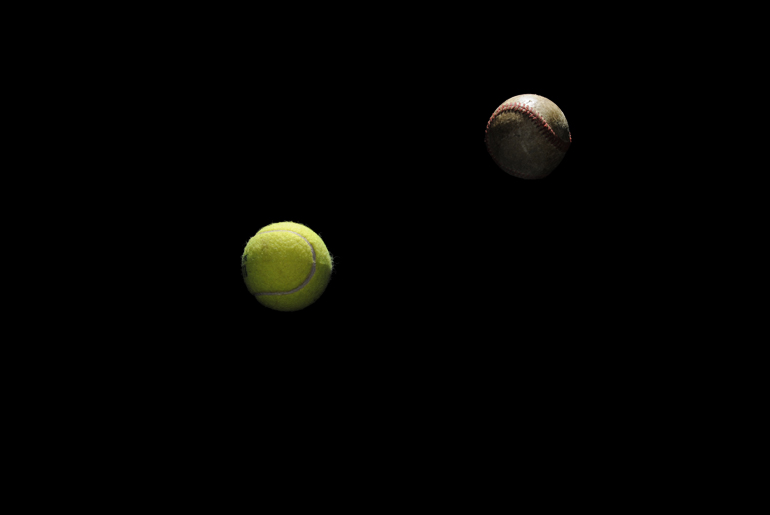 Two stories here: The tennis ball is one of countless furry patches of neon that I and other cross-country runners on my high school team would pick up and throw during practice. Usually at each other. The baseball is one my cousin picked up and gave to me after one of my Little League baseball games. I didn't hit the game-winning home run, and this might not have been the home-run ball, but the gesture was still cool. I keep them now because they remind me, "Hey, I played sports!" (There are also pictures, somewhere, from when I played football in elementary school. But I can't throw those.) Alex Farris

I kinda wish I had a bow so I could use this. I received this very authentic weapon (real feathers, stone arrowhead) from a member of the Boy Scouts' Order of the Arrow during my Eagle Scout court of honor. The OA only gives this to boys who were the first in their class to attain the rank of Eagle Scout. Although I've done a lot of other good and work-intensive things since then, I think of this as the first important major award I received as well as a reminder to keep moving forward.

Major award? ...Yeah, I could use a leg lamp. Alex Farris 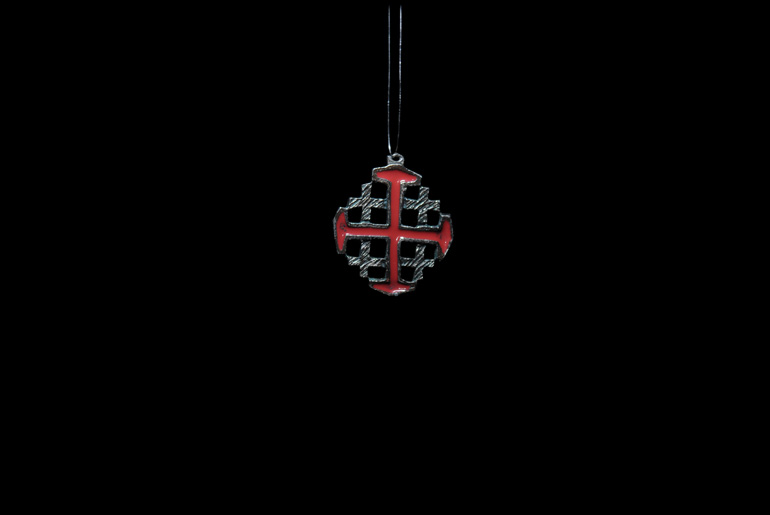 As a cradle Catholic, I've collected religious implements like some people collect commemorative pens or shot glasses. Most of them came to me as gifts for the initiation sacraments or graduation, but those have largely been neglected. (The gesture and the giver haven't been forgotten, of course.) This medal, a Jerusalem Cross, persists because I had to earn it. My high school senior retreat was what first broke me out of my shell, and no matter how far life will bring me from my faith, I'll be forever grateful for the experience of earning this medal. Even if I don't wear it; it used to be on a chain, but the top loop broke. Alex Farris 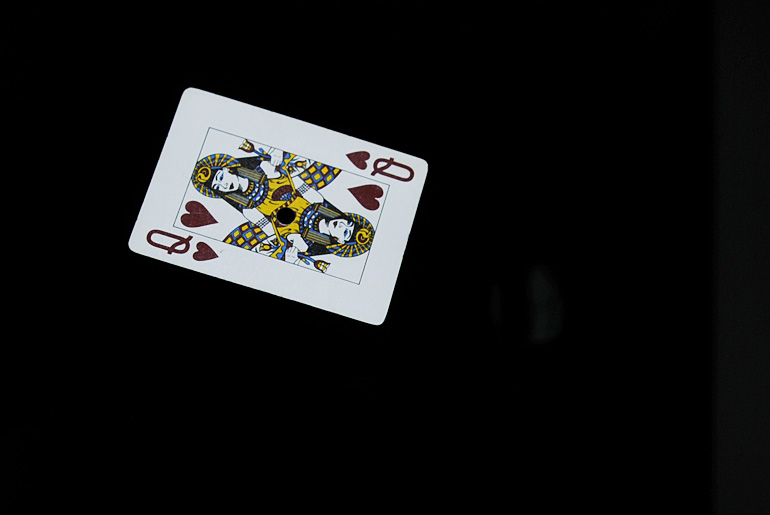 My lunch table senior year of high school was the loudest in the cafeteria, and it's because of this card and the rest of its deck. My parents picked up the deck after it was used at a Caesar's casino (hence the postmortem hole in the middle), and I kept it in my backpack. During lunch, my friends would, quite loudly, play euchre, Egyptian ratscrew, and Presidents over our rectangle pizzas and Frank's Red Hot. It's a reminder of how competitive I was/am and how much fun a stupid thing can be. Alex Farris 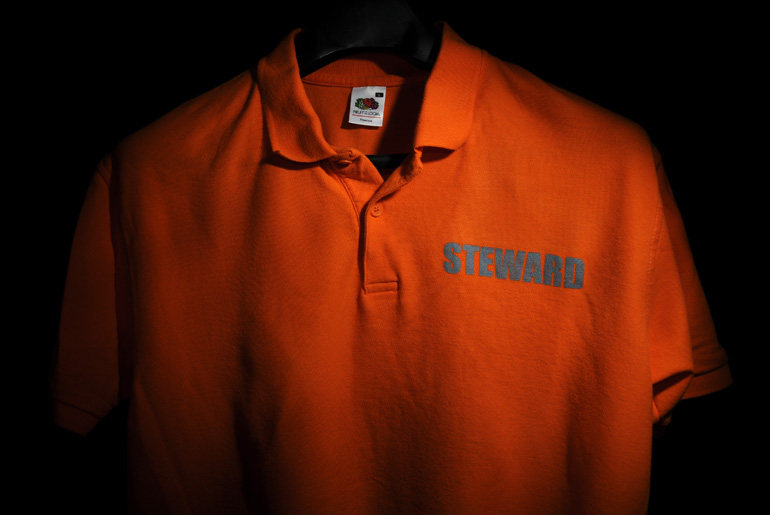 I got this shirt at the end of my two-month internship at the Science Media Centre in London. Apparently I had the best timing in the world, as London was host to the biennial World Conference of Science Journalists the last week I was there. I helped the SMC director organize some panels at the conference, and as a result I could go there for free as a steward. Hearing and talking to the world's best science writers was beyond thrilling, but it was also the last time I could hang out with a good British friend I made at the SMC. I'll never wear this shirt out in public, but I'll keep it. My friend and I had a good time in these shirts, we still keep in touch, and I saw her again while studying in Madrid, so it's not a symbol of an end. Alex Farris 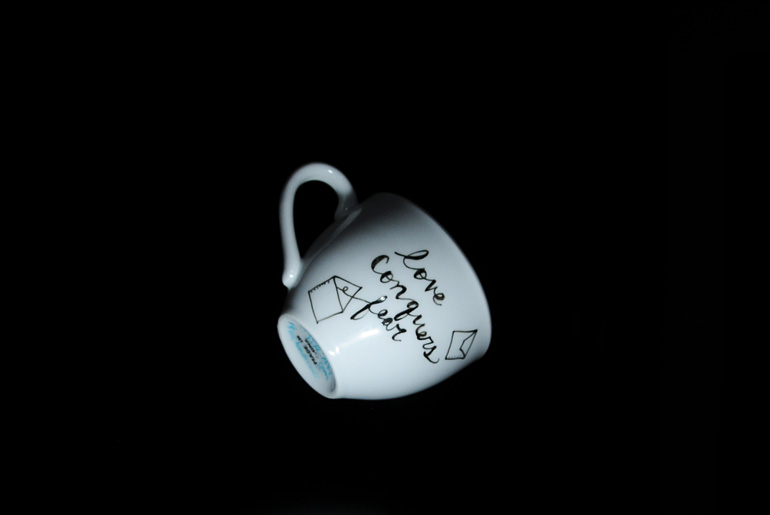 A friend from my Science Writing class runs a store on Etsy. (She's the only reason I've ever gone on Etsy.) I wanted to buy a unique gift for Valentine's Day last year because me having a girlfriend on V-Day was unique in itself. My friend's hand-painted pair of teacups (the other said, "and I love you dear") was perfect for the occassion, and my girlfriend gave me the biggest hug when I showed them to her and gave her the second one. I'm not sure what has become of her cup since we broke up, but even without the happy memory of that gift, I still value the message of the cup I still have. It's a reminder to both cherish the good parts of the relationship and not be cynical of the powerful and good things love can do. Alex Farris 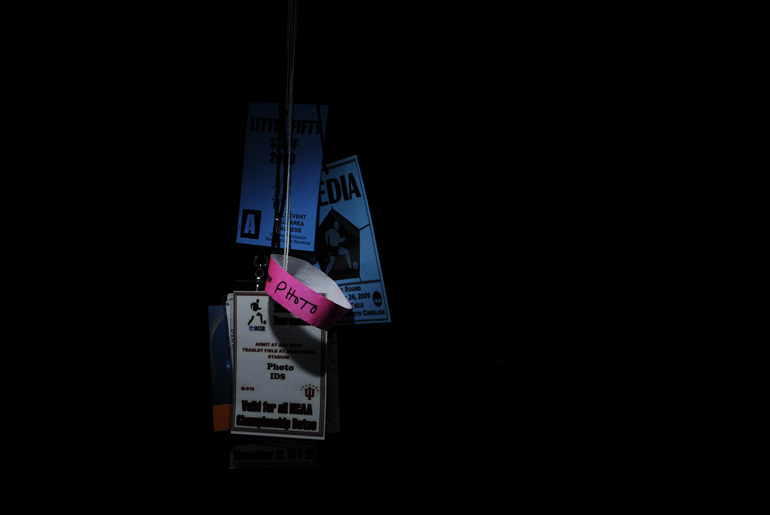 I suppose we'll end on something self-explanatory. They don't go quite to the extent of Evidence of My Existence, of course. These aren't credentials for the Olympics, the White House, political campaigns, Asian aid groups, or hostile governments; but passes for Little 500, IU Dance Marathon, NCAA championship events, and the Super Bowl Village will suffice. For now. Alex Farris