I finished at the Journal & Courier on April 13, and by the looks of the blog I haven't done anything since. Not true, though: I did three freelance assignments for the Star, one freelance assignment for the J&C, one contract private birthday party and a quick actor headshot for my uncle in between then and now. I must also add that a lot of my free time recently has been spent, not on updating the blog, but on reading Salman Rushdie's The Satanic Verses and E.O. Wilson's On Human Nature, both of which I highly recommend if you ever want to fill your mind with profundity. On Human Nature especially appeals to my science-minded self, and it surprisingly holds up considering its publish date of 1978. It's certainly worthy of its 1979 Pulitzer Prize for General Non-Fiction.

Seriously, you should buy or rent it the first chance you get. You won't be sorry.

For more photos, head to these Star links for the Christamore House Guild event, the Vacant art show and Perry Meridian High School's prom, and the J&C's EyeSpy gallery of the Grand Prix Breakfast Club. 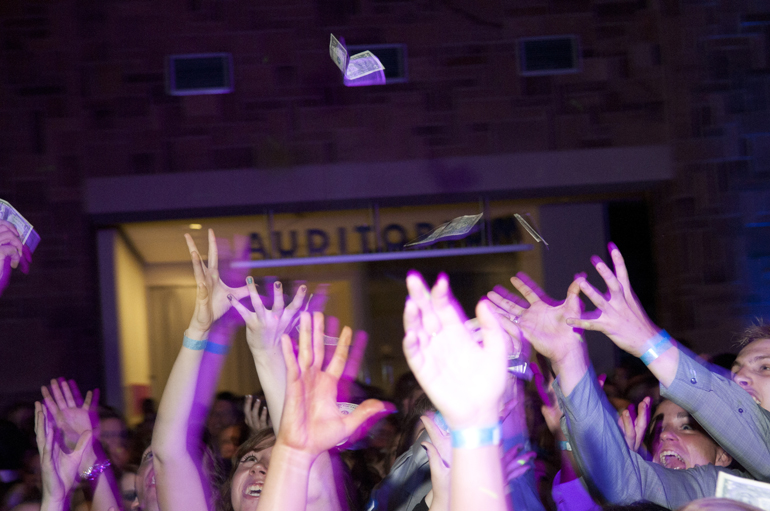 Students reach for money thrown into the air during Perry Meridian High School's prom, themed "Moonlit Memories," on Saturday, May 4, 2013, at the Indiana History Museum in Indianapolis. (Alex Farris / For The Star)

Week Six at the Journal & Courier

This is my last weekly post of photos as a temporary staff photographer for the Journal & Courier. I had a lot of fun at the paper, I learned new things and I reinforced what I learned at the IDS. I'm still slotted to shoot two freelance assignments for the paper this week, so all isn't over with them, fortunately.

Enjoy the last week of photos. Be warned, though: If you aren't a fan of bugs, or you get easily grossed out, tread gingerly through photos two and four through six. Creepy-crawly things abound. If, however, you are entomologically inclined, then have fun!

Shelby Allen reacts as Gracie Russell puts a cricket in her mouth during the cricket spitting competition at Purdue University's Bug Bowl on Saturday, April 13, 2013, on the Purdue campus.

Week Five at the Journal & Courier

Now that the photo editor is back from his medical leave (but in a scaled-down, managing-the-desk-and-taking-some-photos role for now), I had less photos to take this week than I'm used to here. I still found time to get some good shots, of course. The first photo was taken last Friday for MJ Slaby's very good story on the Aging Brain Care program. We visited Don Grau, an Alzheimer's patient at IU Health Arnett who lives with his son and daughter-in-law. He gets home visits in the program, which helps make sure he gets a high standard of care and prevents unnecessary trips to the ER. It's a good program, and Don's a good guy, even with the wildly-shifting conversations.

Don Grau, who has Alzheimer's disease, picks up his drink and looks at Scrabble letters arranged on his placemat on Friday, March 29, 2013, at his daughter-in-law's home in West Lafayette. During visits from IU Health Arnett's Charmin Smith in the Aging Brain Care program, Grau spells words, identifies figures on cards, and talks with Smith and his caregiver, daughter-in-law Peggy Grau.