Soon after my biology test on Friday, Mike Fender texted me wondering if I was up for shooting an IU men's basketball game for the Star.

For a while, the primary content on this blog was IU men's basketball. I was one of the beat photographers for the Indiana Daily Student, and during that time, I had grown quite accustomed to Tom Crean's pacing, Martha the Cleaning Lady, and the dedication of student fans, even though the team was not yet good. I also grew accustomed to the fellow photographers on the baseline: Chris Howell of the Bloomington Herald-Times, the Associated Press guys, Mike Dickbernd of IU Athletics and his intern (Peter Stevenson at the time), and whoever came down that night from The Indianapolis Star (usually Matt Kryger, source of endless jokes and well-placed distractions). I was a little sad when the season ended, but as I was used to endings in my senior year, I didn't make a big thing of it when I shot my last game at Assembly Hall. It helped that IU finished last in the conference that season.

I've been back to Bloomington multiple times since then, and once I was even on the floor of Assembly Hall, but when I got that text, I was so excited to go back. I stepped onto the floor, all the memories came rushing back, and I HAD to share it on Instagram. It just felt right. The Martha the Cleaning Lady video played, Tom Crean paced down the sideline, hiking his pants up all the time, and even some of the same photographers were there.

The only big differences were these: IU was a good team again, the IDS photographer (Caitlin O'Hara) and IU athletics intern (Steph Langan) were younger than me, and I had grown up to be, effectively, Matt Kryger, the guy the Star sent down for the night. All of that made the experience even better, and I hope I get another chance to go back home.

The full 19-photo gallery appears here, but fair warning: The crops are weird. The Star just moved to a new website layout, and I think they have a bit of work still to do with their photo galleries. I definitely did not crop photo 5 that way, and it showed up full-frame in the paper this morning. 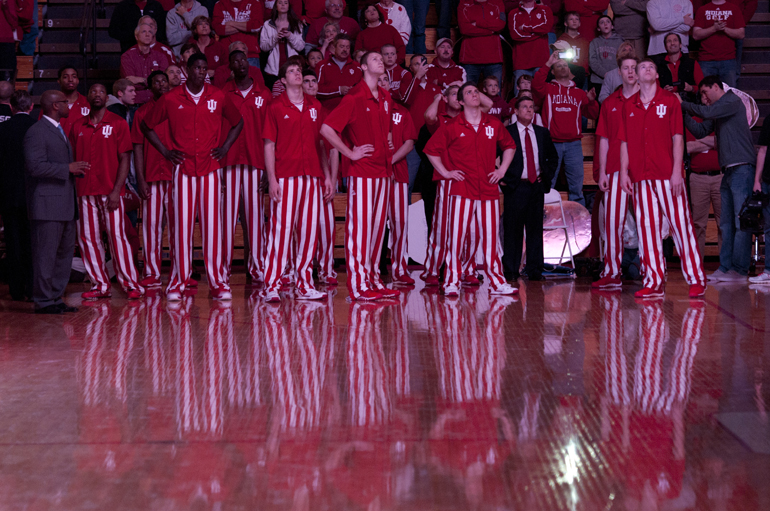 Hoosier players watch the pre-game highlight reel before their game against the University of North Florida at Assembly Hall in Bloomington, Saturday, Dec. 7, 2013.

Last year, after the annual Indiana News Photographers Association awards judging, I didn't have much to do. I hung around Bloomington a little bit, somewhat aimlessly, until I recalled the Lilly Library. I had been inside the repository of Really Old Stuff maybe four times as a student, and even though I got to hold John Ford's Oscar and read Ernie Pyle's letters, I didn't fully appreciate the library and its treasures. On that day, though, I finally took advantage of my free time. I flipped through the card catalog, and in no time I had my hands on personal letters, handwritten notes, and a draft of the Emancipation Proclamation, all of which flowed from Lincoln's pen.

This year, I decided to treat my dad to that same awesome privilege. I was more prepared this time, though, and in my preliminary research I found that the library hosted, along with its manuscripts, bronze casts of parts of a life mask of the 16th President. So, my father got to hold faithful representations of Lincoln's face and hands.

Even with my preparation, we still got a surprise: the library also holds the Sumner-Wormly copy of the Thirteenth Amendment.

Note: This was an event for Dad, so I only took my iPhone into the library. 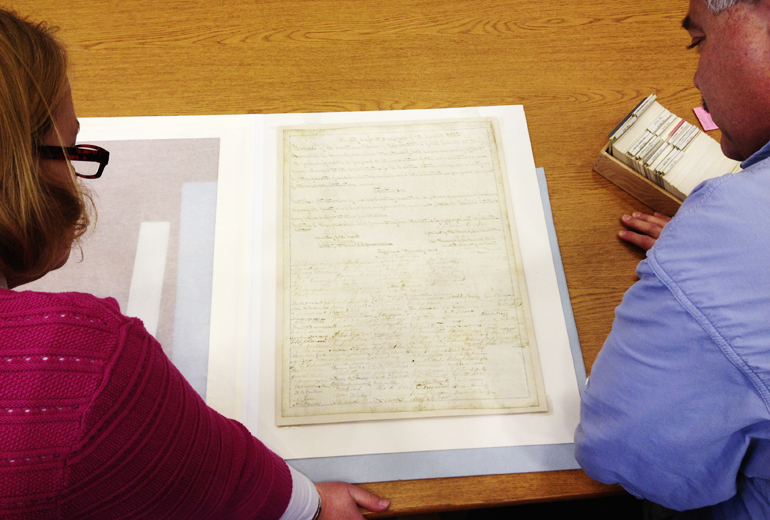 This is the Thirteenth Amendment. Or at least the Sumner-Wormly copy, made soon after passage in Congress. Before it was sent out to the several states for ratification, Lincoln made what some call a constitutional faux pas: he signed the document, even though the executive has no formal part to play in the process of amending the Constitution.

Hawks in the Hall

At my elementary school, we counted among our parents Tom Zupancic, then the strength and conditioning coach for the Indianapolis Colts. As such, while I was on the football team (in only the strictest sense of the word "on," as I hardly figured into the offensive line), we got to play on the RCA Dome turf before a Colts game. I don't remember much of it, but I remember how cool it felt.

I saw much the same thing yesterday. St. Charles elementary school in Bloomington has counted among its parents IU men's basketball coach Tom Crean, and in 2008 the school (mascot: the Hawks) started the Hawks in the Hall tournament held in Assembly Hall. So, while IU was playing at Ohio State University on Sunday, a few elementary school teams from around Central Indiana took over the arena, including my old school (they're the guys in green). It was a welcome return for me, as I'd last been on the floor as an IDS photographer during what is looking to be their last bad season for a long time. ...I graduated a year too early.

Tomorrow is Abraham Lincoln's birthday. It's also my dad's birthday, so I'll be posting photos of the real reason I was in Bloomington this weekend: a return to the Lilly Library. 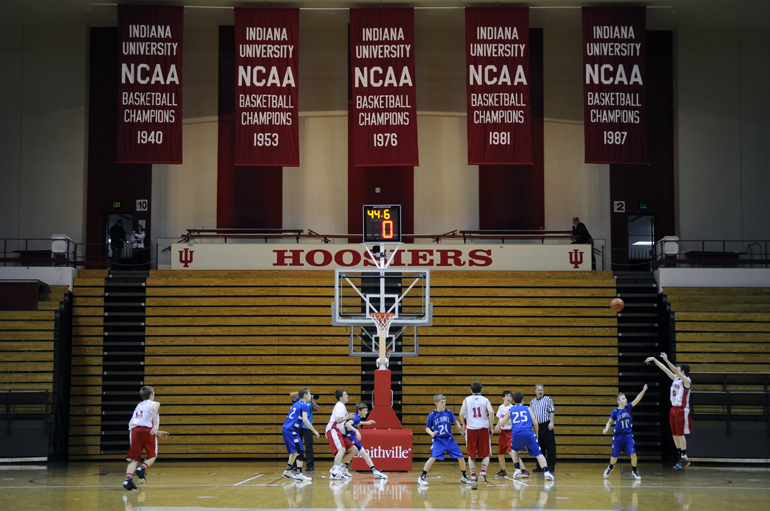